Home prices are sky high, but mortgages are still cheap! 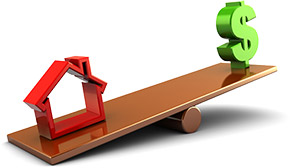 Posted at 18:58h in Uncategorized by bkoska

Real estate is crazy expensive. The median existing home price climbed to $252,800 in May, according to the National Association of Realtors, exceeding the peak hit in June 2016 of $247,600.

At this point, home prices have been rising every month for more than five years. While that’s good news for home sellers, buyers are having a tough time finding homes they can afford. Cities across the U.S. are facing major housing shortages, which means buyers have to compete for homes with bidding wars and offers well above asking price.

Builders aren’t building enough houses to keep up with demand and current homeowners are hesitant to list their properties because they’re worried they won’t be able to buy a new home.

“We have tremendous demand for housing, but there is nothing available to buy, said Keith Gumbinger, vice president of HSH.com.

Making matters worse, rents have also been on the rise, which means it’s harder for potential buyers to save up for a home in the first place. But there has been one saving grace for buyers: mortgage rates.

Even though the Federal Reserve has begun raising interest rates, mortgages have been hovering below 4% recently. Last week, the average rate of a 30-year fixed mortgage ticked down to 3.90%.

In the weeks after the presidential election, mortgage rates rose above 4% on enthusiasm for economic improvement. But as that optimism started to wane, rates fell again, Gumbinger said. They’ve remained below 4% for the last five weeks.

“After the elections, there was fantastic enthusiasm we would get fiscal policy changes and the economy was going to drive forward faster,” said Gumbinger. “Not a whole lot has been accomplished on that front … and that has confused the market and dampened enthusiasm.”

With the Fed raising rates, interest rates are expected to gradually rise over time, but should stay pretty low for the foreseeable future. Gumbinger expects rates to be a little more higher by the end of the year.